What happens when a surrogate decides to keep the child?

Surrogacy arrangements can be a long and difficult journey for both intending parents and the surrogate.

It is every intending parents’ worst nightmare to hear their surrogate say that they want to renege from their surrogacy agreement by terminating the pregnancy or keeping the child.

What can the intending parents do, given that Surrogacy Agreements are not enforceable? Keep reading to find out. 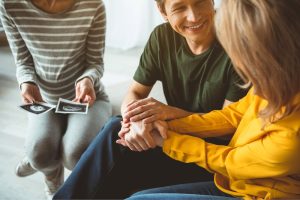 Ticker & Rodda involved a same sex couple, Mr Tickner and Mr B Tickner, who met a woman, Ms Rodda, online through social media. The parties met in person and entered into a voluntary surrogacy arrangement.

The parties agreed that Ms Rodda would be a surrogate for the Tickners, using Mr Tickner’s sperm and an egg donated by one of the Tickner’s acquaintances.

As is required, the parties attended pre-surrogacy counselling and entered into a Surrogacy Agreement in accordance with the provisions of their state legislation, the Surrogacy Act 2010 (NSW).

To assist Ms Rodda with her pregnancy, the parties agreed that the Tickners would move to her city for the duration of the pregnancy and for a short time following the birth.

Things were progressing well until the Tickners moved to Ms Rodda’s city. Within the first month of the move, problems arose and Ms Rodda began to contemplate terminating the pregnancy.

Unfortunately for all those involved, the problems did not stop here. By the second month, Ms Rodda informed the Tickners through their joint counsellor and her lawyer, that she had terminated the pregnancy.

It was not until later in the year, that the Tickners were informed that Ms Rodda had not terminated the pregnancy, and had in fact given birth.

The Tickners immediately issued proceedings in the Federal Circuit and Family Court of Australia seeking equal shared parental responsibility (between themselves) of the child, and for the child to reside with them.

In this case, the parties agreed that the child should live with the Tickners, and that the Tickners should have equal shared responsibility of the child. This agreement was also approved by the Independent Children’s Lawyer.

Can the Court make consent orders for the child to reside with the Tickners?

The Judge found that both Mr Tickner and Mr B Tickner (whose sperm was not used) were eligible to have parenting orders made in their favour on the following basis:

The Judge found there was nothing to suggest that it was not in the child’s best interests for orders to made for the child to reside with the Tickners and for the Tickners to have equal shared parental responsibility of the child.

In coming to this decision and making these orders, The Judge considered Ms Rodda’s consent and the Independent Children’s Lawyer’s approval of these proposed orders to be of particular relevance.

This was a happy ending for the Tickners. However, this is not always the case with surrogacy arrangements, particularly when a surrogate does not consent to parenting orders, like Ms Rodda did.

When entering into a surrogacy arrangement, it is important to remember the following points, which were highlighted by the Judge:

We also suggest that you use this link to understand what else not to do in surrogacy arrangements.

If you require assistance with drafting, reviewing or getting independent legal advice on Surrogacy Agreements or want to discuss your options, please contact our Melbourne Family Law expert at Rowan Skinner & Associates Lawyers, LIV Specialist Family Lawyers, to arrange a complimentary no-obligation discussion.